We have already built the Ausf. J with a long gun and now it’s the turn of the Ausf. E. The differences are only marginal and I compare both models with each other. 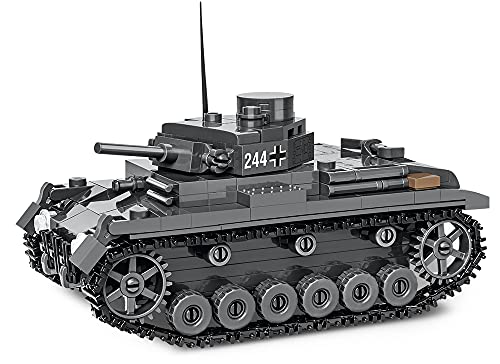 Since we only have a width of 5 knobs, the base plate is composed of several small plates. These are then reinforced by further plates. The mount for the drive rollers, like the rear, consists of only a few parts. In order to make optimal use of the width on this scale, a lot of jumper plates are used. The side panels also consist largely of such plates.

With another row of plates, we have already reached the final tiles. The rollers are again built from 3 parts, as we already know from the J type. As a result, the tracks have a pretty good grip and run reasonably well for this scale.

Before we build the turret, a few small parts are attached to the hull and an antenna is built. The actual turret is ready in a few construction steps and can be placed on the hull. The most striking prints are also used here.

The differences to Ausf. J are only very small. The tower has a slightly longer barrel and is also smaller than the Ausf. J. In addition, the Ausf. E has an antenna and a tool. The rest is completely identical, with the exception of a few small parts. If you are not a collector, you can safely do without this model if you already own the Ausf. J from last year. Unless you value a World of Tanks code, which is included in the other model.