With the B-25B, COBI has launched another new set this year. As with all new models, there are no stickers and everything has been printed. 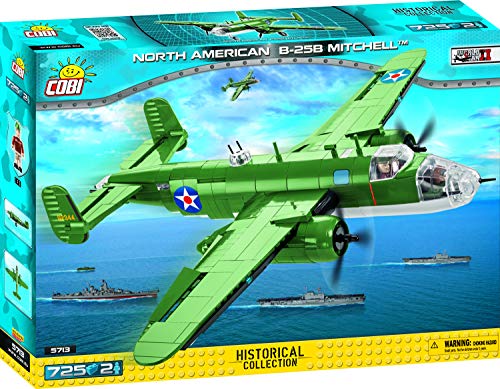 The basic construction consists of plenty of plates that form both the middle part and both wings.

The rear area is created from the usual brackets and other stones to reverse the construction direction. We build 2 flaps for the bomb bay and then work on the cockpit, where one of the usual molded parts is used.

For reasons of space, the shooter in this set consists of only one head. After the hull has been completed, it is the turn of the engines and propellers. These are built separately.

After the fuselage was also closed from above, the transclear molded parts for the cockpit should actually be attached. Unfortunately there was a missing part that is not in any other set and therefore could not be replaced. This meant that I could not complete the B25 completely at this point and had to wait for a replacement delivery from COBI. This arrived after just under a week.

In the following steps we will build the rear wing and the landing gear.

Finally, some printed parts are used below the wings.

After more than 100 sets, I had a missing part here for the first time. However, the service from COBI is very good and I received the replacement before Christmas. So I was able to add another beautiful airplane to my collection.