With the SU-100 there is again a Soviet tank destroyer in the COBI program. Thanks to the 655 components, the model has some nice details that bring additional building fun. 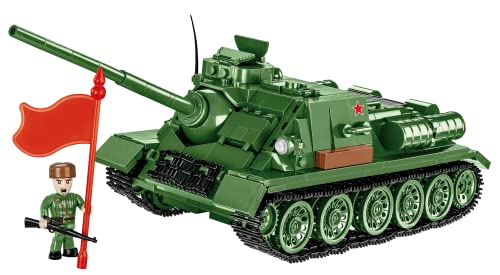 The 127 construction steps of the SU-100 are divided into 2 construction phases. At the end of the instructions you will find the printed tabletop card and the parts list for the set. Due to the grayed out construction steps, the colored, new parts can be easily placed.

We start again with a stable construction made of plates, under which the Plate Modified for the rollers are placed in the next step. Then it continues with large bricks and the construction. The construction for the drive rollers is built separately. Anyone who has already built several tank models knows this step of course.

After the front armor has been built with replacement tracks and attached to the hull, the model is widened with additional panels and the first tiles are used. The engine in bright orange stands out clearly and is completely built. The print provides further details.

Since we don’t have a turret on a tank destroyer, we go straight up from the hull. One part of the cladding is built separately and another part is made via slopes directly on the hull.

Since this model is a 2in1 set, different national badges are included. However, there are no stickers, so various printed slopes are included. So you can decide for yourself whether you want to drive the SU-100 in Soviet or Polish service. Then it is time for the rollers and tracks, which are followed by the tanks on the side.

The gun and the figure with a large red flag complete the construction. A small nameplate is also included again.

The model is not particularly large, so many of the 655 components can be used for details. You can see very nicely that the hull is a converted T34 if you compare the two models.