The T-54 is already one of the older models and therefore of course a comparison of the quality is a good idea. You don’t have to do without details here, but can the aged tank also compete with newer models? 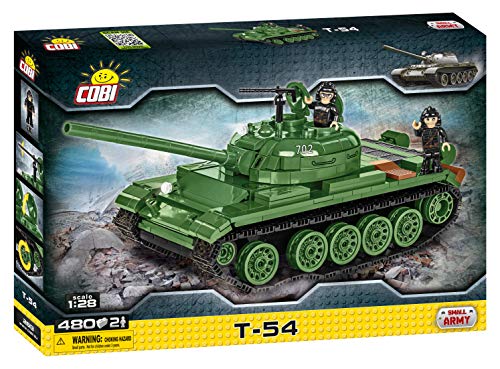 The medium battle tank has been built since 1947 and is still in use in some countries today. Around 40,000 vehicles were built that were used in various conflicts in the Middle and Far East. It was also used to quell the Hungarian uprising and was used in the Yugoslav wars.

The stone quality was already at a high level in 2018. Differences can only be seen in the construction. While the tracks on newer models usually run excellently, they are quite tight here and often hook.

The assembly instructions have basically changed little in recent years. There is only a parts list in the current instructions. Otherwise, COBI has grayed out old steps and colored new components. The construction is divided into 3 construction phases with a total of 89 construction steps.

Right at the start, one of the two large plates is used, which is then built on with bricks. Drive and track rollers are built separately again and then attached to the hull. Then we cover the lower hull with plates and give the tank its width.

Front armor and rear are now built in several construction steps. Then we can start by covering the substructure with tiles.

After almost every stud has been hidden, it is the turn of the rollers and tracks. These are extremely tight and absolutely need a carpet in order to function properly. With an additional track they run better, but the tracks become too long.

The turret is given some molded parts to perfectly represent the curves. The side armor and the rear armor are attached as usual by reversing the direction of construction.

Now all that’s missing is the gun and the two figures and the T-54 is ready.

You can see the age of 2 years on the tank. The components are comparable to the current quality, but the tracks run much better with new models. COBI has learned a lot here in recent years and adapted the construction accordingly. Those who do not yet have this model can rather opt for the new T-55, which is visually very similar.