This version of the infamous Stuka is more than just an upgrade. Thanks to the larger scale, you get a very nice, detailed aircraft that clearly stands out from its predecessor. 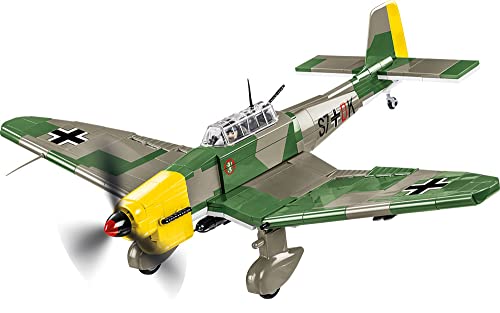 The construction of the new Stuka begins in the middle. After that, both wings are built and combined with the middle part. The same is done with the front and the rear. Here the construction does not differ significantly from the predecessors.

The cockpit consists of the usual moldings and accommodates 2 pilots. Since the wings are currently still swinging freely and can also be folded up, they still need stabilization on the underside. In principle, the chassis has the same molded parts as the previous model. Due to the new scale, however, these are larger. The stand hasn’t changed in over a year and is the same one that all other newer planes use.

The last Stuka were all quite similar. This new version not only uses a new color, but also a new scale. While many tank models have gotten smaller, this aircraft has grown a bit. This becomes particularly clear in a direct comparison. A very nice, stable model with significantly more components than the other WW2 planes.