The Sherman is one of COBI’s favorites and has already been implemented in numerous variants. In this case it’s a special hybrid version of a Polish unit composed of 2 Sherman variants. 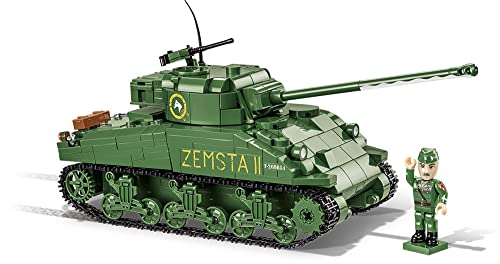 The hull on this model is made up of 3 parts that are built in separate sections. First it’s the turn of the lower area, onto which the other two parts are then placed. An engine is also being built for this, the cover of which, however, is difficult to open without tools. The hull is completely tiled and is therefore free of visible nubs.

The molded parts that are typical for the Sherman, which we also find in the other variants, come to the rollers. The tracks run very well for a Sherman, which is anything but a given. The turret consists of a base construction, to which the separately built side armor and the rear are then attached with a chest. The recording from the barrel drove me insane. The small C-Clamps are difficult to insert and fall out again with every touch. The MG is also a bit annoying because it’s way too loose and falls out again easily.

This Sherman is a nice model with little quirks. However, it’s not a must-have set unless you’re a collector. There are nicer and larger variants of COBI.