French military aircraft made from bricks are rather a rarity. And then COBI also brings out such a beautiful model that simply has to be built. 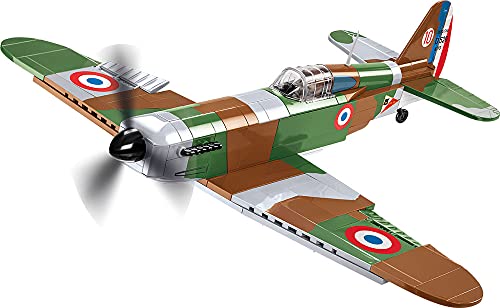 No construction phases are required for 283 components. So they are simply divided into 99 construction steps. The instructions do not contain any surprises. COBI remains true to its style and shades out old construction steps so that only the new components are shown in color. Missing components can be reordered using the parts list at the end, but this was not necessary in my case.

We start with the left wing, which will be partly completed. After the right one has also been built, we put the two together and reinforce the construction from the underside. At this point we also build the chassis, which has new molded parts. This means that the wheels can be retracted almost completely. The wings can first be put to one side, as it is now the turn of the front part of the fuselage including the cockpit.

As usual, a lot of work is done with reversing the direction of construction and a number of add-on parts are built separately. The camouflage colors are mostly represented by colored tiles. Only a few larger parts were printed. After the stern has also been completed, the fuselage can be put together.

The cockpit is reinforced on the sides with tiles and printed slopes. Then it’s time to connect the fuselage and wings. In this set, the pilot also receives a mask that we have only seen in modern COBI aircraft so far. Finally, the cockpit is completed and the plane gets its propeller. For the stand, COBI is again using its new version, in which the plates and tiles no longer have to be plugged in from both sides.

I also modified this stand so that the nose of the aircraft points downwards. So you don’t look at the bottom of the model on the shelf, which I like much better.

Except for a few new molded parts, this model is also built like almost all fighter planes of World War II. A French model, however, is rather rare and therefore it really deserves its place in my collection. It is extremely stable and because of the large number of prints, some of which are large, it looks really great.