COBI’s aircraft fleet is growing, though not with entirely new models. But a remake can also be interesting and a good start for new collectors. 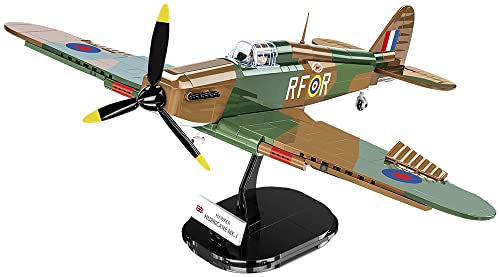 Anyone who has already built a COBI World War II aircraft will not discover anything new here. The construction begins again with the entire wing construction, which is now common for small combat aircraft. The wings are only built individually for large models. The next step is the fuselage and stern. Again, everything is as usual here. With the front area and the engine, the fuselage is completely finished. Since COBI has been delivering all models without stickers, large printed molded parts have been used here.

After the cockpit has also been reconsidered, the fuselage can be combined with the wing construction. The last step is made by the chassis, which can be almost completely lowered. The base including the type plate and the pilot then form the conclusion. In this case, the pilot is the real person Josef Frantisek, who was given an additional peaked cap.

This model is aimed primarily at newcomers and collectors. If you just want to build an airplane from COBI and already own current models, you have to get used to an identical structure.