The soldiers called this plane the warthog because it was so ugly. The new model is, however, quite handsome and very stable. 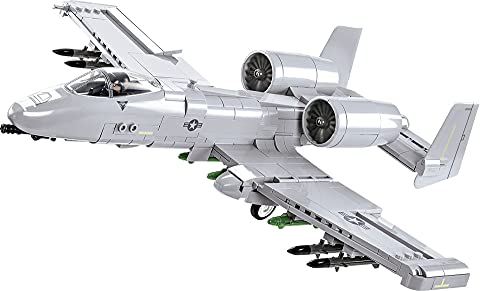 The 568 components of the warthog are divided into 2 construction phases. These in turn consist of a total of 137 construction steps. COBI has remained true to its line of building instructions for a long time and continues to rely on grayed-out building sections that make assembly very easy.

We start right in the middle with a part to which the wings are attached in the further course. Before we even start with these, the entire hull is completed. The cockpit, landing gear and armament are also completely dismantled. Only then are the two very short wings built. Hinges gives them a slight inclination, just like the original. Even the offset wheel under the cockpit corresponds to the real A-10. The position is owed to the machine gun under the cockpit.

So far the model is very stable. Compared to other modern aircraft from COBI, there are no attachments here that are fragile or can easily fall off. A total of 9 missiles are placed under the wings.

The two oversized jet engines are not only given a molded part that is intended to indicate the rotors. With a new, moving part, it looks a lot more realistic. Put together, the two look almost like binoculars. The structure of the stand has changed significantly. The shape is identical to its predecessor, but it is only built from above.

You can’t really call this plane ugly, but that’s a matter of taste. COBI has at least done a good job and developed a fairly authentic model. Many details are the same as the original. It’s also really stable.