With this model we take a little excursion into the 1st World War. The most famous and largest tank is probably not the small FT-17, but it had the greatest impact of any tank in the war. 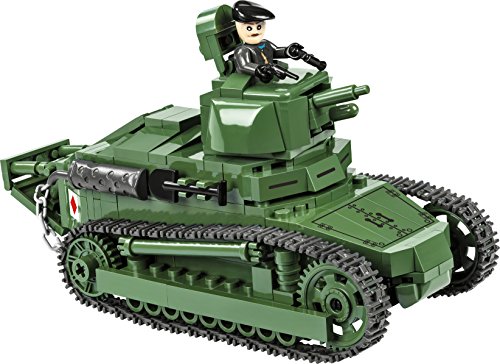 With a small model, we start small. A large base plate is not an option because of the design. Instead, smaller plates are strung together and built up with bricks and brackets. We quickly achieved a shape that resembles a classic car.

In the further course the model looks more and more like an old armored truck. Several layers of plates, bricks and tiles complete the hull, provided that this model can be referred to as a hull in the classic sense.

With the boom, we come to a part that is a little tricky. With hinges and C-clamps we build a rod through which a track is threaded at the end. Then we add some details to the FT-17.

Despite the size, gears and rollers are also used in this model. Of course, the latter are much smaller than the larger models. The smallest tracks are used. Next up is the small turret.

The construction techniques do not differ here from the large models. A base is built from brackets to which the separately built armor for the sides and rear is attached. With the hatch and the tiny gun, the model is ready and the commander can take his place.

The Renault FT-17 is a really cute model that still has many details. It should not be missing in a tank collection, especially since it was more important than the Mark 1 and A7V at the time.