The small Patrol Boat is the first boat from the still quite new Vietnam series. Some construction techniques are reminiscent of the great battleships of World War II. 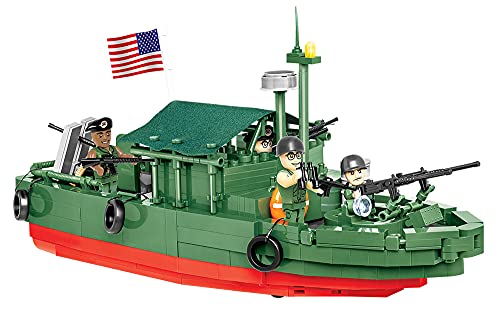 Instead of a sheet of stickers, which COBI rarely has anyhow, a small panel of material jumps towards us in these instructions. It is one of the 615 components in this set, which are divided into 122 construction steps.

On a small scale, the beginning is a bit similar to the large ship models from COBI. However, the substructure ends at the waterline. After 3 layers of plates, the deck construction begins.

The bow of the patrol boat is built separately and is also reminiscent of the construction of the large ships. Except that it is flatter and wider. The machine gunner gets his seat in the front area and the rear is tiled.

The ship wall is also built separately and attached to the fuselage in 2 parts. The helm is completed and the fabric is used. It is attached with 6 small pins through pre-punched holes. A twin gun is attached to the bow, a machine gun of which unfortunately sits so loosely that it constantly falls off. However, replacing a C-clamp fixed this problem.

Finally, we will miss a few details on the boat. This includes a railing made of tubes and 6 tires that protect against damage when you put it on. The set includes 4 minifigures.

The boat is solidly built and it is definitely fun to build. So it’s not because of the quality that I can’t really make friends with this set. It completes my collection. Otherwise I would probably not have bought it.