There hasn’t been a new 1:28 scale Panzer III for years. The successor has not only received more details, but also new tracks in an intermediate size. 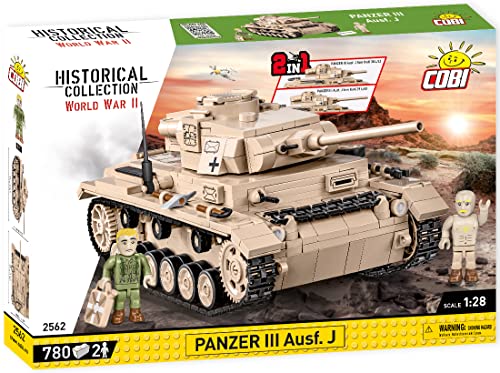 After a fairly unspectacular start with various plates and bricks, we build an engine that looks really great on this scale. This fills almost the entire rear and is hidden under a cover that is not attached to any studs. Anyone who has already built several COBI tanks knows this construction technique from other models. The cover is simply pushed under the tiles and wedged on the opposite side. Not only does it hold up well, it also looks very nice. Tools, hoses and additional rollers are used as details.

After all the rubbers have been pulled onto the rollers, it is finally the turn of the new tracks. These are significantly more flexible than the other small chains from COBI. This is also noticeable in the test. The tracks run buttery smooth and do not require any pressure. Even a simple push from behind is enough. The 2in1 design suggests more than can ultimately be built. The turret is built completely and does not change in the second version. Only the barrel has a different length.

The new Panzer III is an all-round success. The professional will surely find some cosmetic imperfections here and there that look slightly different from the original. But let’s not fool ourselves. This is a model made of bricks and it is really perfect for that.