The Mark 1 doesn’t just have a distinctive shape. It is also larger than many WW2 models from COBI. Of course I will also compare it to the A7V tank. 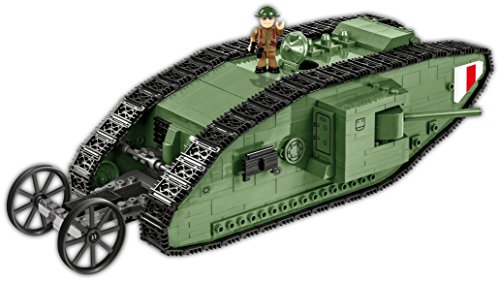 Thanks to the Minister of the Navy and later Prime Minister Winston Churchill, this vehicle saw the light of day and the trench warfare. Since he referred to the Mark 1 as a land ship, he was placed under the Navy. The crew consisted of 8 soldiers, since several men were needed for the controls alone. There were a total of 49 of these monsters, some of which were captured and used on the German side.

As always, COBI delivers perfect quality. Everything fits together perfectly and holds so well that it can often not be separated without the help of a parts separator. All components with motifs were printed.

The instructions are easy to understand and offer no surprises. All components that are set in the respective construction step are shown in color. The rest of the model is completely grayed out. After just 82 steps, the 605 bricks were installed and the model was completed.

The hull of this unusual tank does not consist of a large plate, but of 10 small 4×6 plates. These are stabilized with both plates and bricks. The lower part of the hull is built separately afterwards and then attached. The recordings of the two guns can also be guessed at.

This is followed by several attachments in separate steps. First, the chassis is built at the rear, which was omitted in later models. Then it’s the turn of the two side armor plates. Finally, these are attached to the tub.

Since this model does not have a turret in the true sense, both guns are attached to the sides by rather unusual construction techniques and stabilized by the casing. The chains go an unusual way, which may also be the reason that they get caught again and again. They work, but that is more than right. On the right surface and with pressure from above, you can get them to roll evenly.

Even if the rear seems more like it should stabilize the tank when driving over ditches, the large carriage wheels were originally intended as a steering. However, they were unsuitable for this and several crew members had to control the tank via the chain brakes. Of course we also build a soldier of the crew with this model.

Everyone can decide for themselves which tank is more massive. The Mark 1 is longer than the A7V. But the A7V is taller and heavier. The proportions of the two models are quite good in comparison. You can clearly see that the A7V is both shorter and narrower than the Mark 1. Both models sometimes use unusual building techniques to represent the unusual shapes. Unfortunately, the tracks of the Mark 1 do not run nearly as softly as those of the A7V.

The Mark 1 model really succeeded. And it is also good that COBI did not choose a newer version, since the rear wooden steering was omitted from 1916. For a fairly moderate price, there are 605 building blocks for a few hours of building fun.