Many have been waiting for this model for a long time and it is just the beginning of modern combat helicopters. With many details, the kit comes amazingly close to the original. 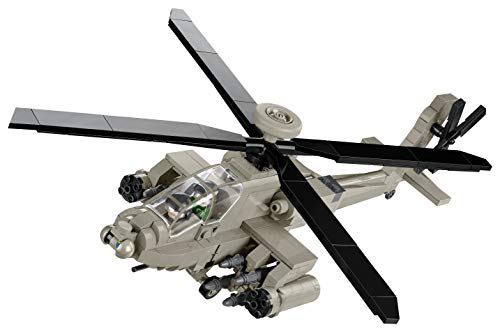 The modern combat helicopter is being built in 2 construction phases with a total of 122 construction steps. Only a few bricks are installed per step, which are displayed in full color. Everything before is completely grayed out.

We begin in a similar way to what we are used to from model aircraft. However, there are no wings after the middle section. The massive use of building direction reversal should sound familiar to many.

But there are still a few hinted wings. However, these are less intended for flight characteristics than for holding rockets and machine guns.

The shape is now clearly recognizable and you can clearly see that it will be a modern attack helicopter. We are now installing a total of 8 rockets on both sides, which cost me a lot of nerves. It was a delicate task to attach this to the fuselage. The entire bracket is kept apart again and again. Both construction technology and order were rather suboptimal. At this point it was already clear that this model was definitely not suitable for playing. Build once, handle carefully and never touch it again. This also applies to the sloping chassis.

The 2 pilots in the cockpit have to forego some anatomical features. While one still has at least an upper body and arms, the second only consists of a head. After both have been placed, the cockpit can be closed with a printed molding. Then we build the tail and the tail rotor.

Finally, we build the large rotor, the base of which is a molded part. The stand should be familiar to most of all other current aircraft models.

The look of this model is really successful, even if I don’t like the color at all. The similarity to the original is unmistakable. The filigree construction and the richness of detail come at the expense of stability. One should be aware of this. But then you get a great model for the showcase. It is definitely not suitable for gaming.