A Patton that is not a Patton at all. You just have to build it. With the M60, the second model of the Vietnam series is now moving into my collection. And it is certainly not the last. 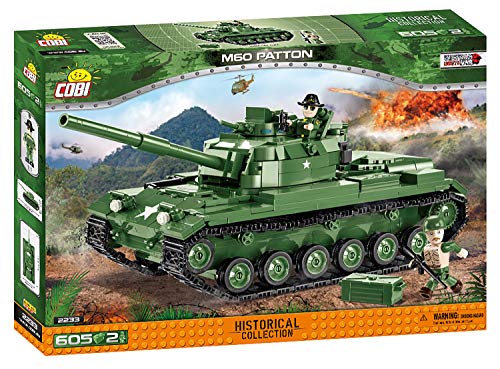 The M60 was also referred to as the Patton, but actually does not belong to the family of names to which the M46, M47 and M48 belong. It was never used in Vietnam either. Since COBI should have taken the M48. For around 30 years it was the standard battle tank of the US Army and was used until the end of the 2nd Gulf War. He was then replaced by the M1 Abrams.

There is also nothing to complain about with this set. The quality is at a very high level and all bricks have an enormous clutch power. In addition, there are no stickers on this tank. Everything was printed.

For some time now, the instructions from COBI have included parts lists that other manufacturers have been used to for a long time. Otherwise, the instructions are at the usual high level. Old steps are greyed out and new components are shown in color. The entire construction is divided into 3 sections and after a total of 130 construction steps, the M60 is finished.

As usual with most models, we first lay some plates, which are then reinforced by other plates. Next, inverted slopes create a slope on the hull. In the coming steps, a stable wall will be built from large bricks.

In order to give the tank its width, the side covers above the castors are built separately. This is followed by further plates and tiles, which give the tank enormous stability.

In the next steps, various details will be added, some of which require new construction techniques.

At some point it will be the turn of the rollers and tracks. For this, rubbers must first be put on the wheels. Finally, of course, there is the mandatory driving test and the M60 passes with flying colors. The tracks run absolutely smoothly and a light push is enough. Now it’s time for the turret.

Here too, the usual reversal work is used. In addition to small details, another, smaller turret is built that contains the machine gun. Now all that’s missing is the gun and the M60 is ready.

In a direct comparison, you can immediately see the more modern design of the M60. The turret is significantly flatter, while the hull has hardly changed.

If you overlook the fact that the M60 is not a Patton at all and has never been used in Vietnam, it is a great model. I was even allowed to build 2 turrets because this tank hasn’t a simple MG. There was of course plenty of building fun again.