With the AU-1, COBI has released a special variant that was developed for the Korean War. How does the model differ from the F4U from WWII? 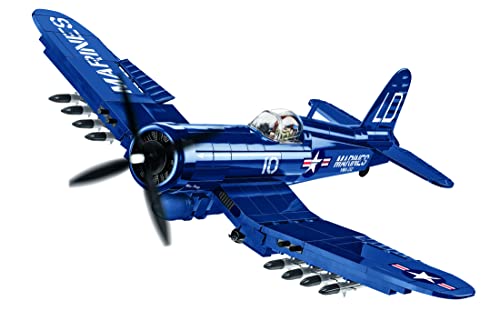 If you have already built the previous version of the Corsair, you might get a small Dejavu. The two models differ mainly in the armament and the engine, so that the few differences can also be found here. There is no subdivision into construction phases for the 330 components. These are divided into 60 construction steps.

As with the predecessor, the first thing we do here is build the middle part of the fuselage. Memories are also awakened on the back, as the construction steps have not changed. The Corsair F4U was also completely printed, but the AU-1 has significantly larger prints that also cover several components. The rear looks really great.

The construction of the engine is the first noticeable difference to the old model. The beautiful yellow molding has to be dispensed with here. The machine is kept entirely in blue. As with the much more modern F-14, this pilot also gets an oxygen mask, which makes the whole thing a little more detailed.

Due to the imprints, the arrangement of the tiles changes compared to the predecessor. In general, not much has changed here. The retractable undercarriage is again slightly unstable and tends to fall off when you try to fold the wheels. The big bomb is a little longer on this model. A special feature of the AU-1 are the many stations for various weapon systems. With 8 missiles this model is already quite well equipped.

The base is the same as the old model and all other current aircraft models that come with a stand.

If you just want a chic, blue Corsair on your shelf and already own the Vought F4U, you don’t have to buy this model. Visually, apart from the armament and the color of the engine compartment, it does not differ from its predecessor. However, if you collect the models from the Korea / Vietnam War, it is of course included.