The new version of the legendary COBI helicopter is a successful further development. More parts, more details and good stability characterize this model. 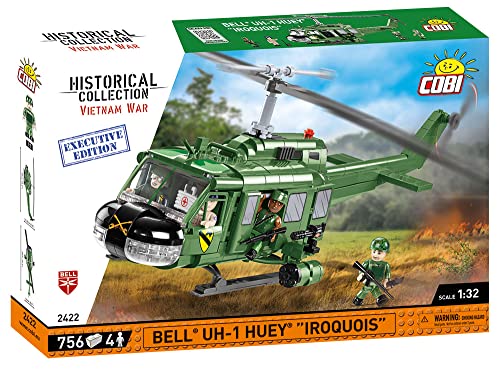 Right from the start, COBI makes use of the rich selection of bricks for reversing the building direction. We start with the underside and then continue to build from above in a negative direction. By further reversing the direction of construction, nubs will gradually become visible here as well. In contrast to the previous model, more molded parts are used here, giving the helicopter an almost perfect shape. However, the gunner’s machine gun has become a bit smaller.

After the front area has been completed, it’s the rear’s turn. This is attached using an unusual technique so that we get a slight angle. This would not be possible with simple hinges without sacrificing stability. Together with the roof, the sliding doors on both sides are also built. The technology is simple, space-saving and works perfectly. The armament, which consists of machine guns and grenade launchers, is now attached to both sides.

Finally, the runners and the significantly larger rotor are built and attached. The set also includes a base that is significantly larger than most COBI aircraft models. I also modified this a bit so that the model looks downwards. It’s much better on the shelf, especially if it’s a little higher. In the normal orientation, you would only be looking at the bottom of the Huey. Figures still have to be built, of course. 2 of the 4 minifigures have separate feet. However, one figure seems to have a miscast or something. The leg doesn’t look broken, but the foot sticks out in an unnatural way. Maybe that’s why there’s a medic and the first aid kit in this set.

The set is extremely easy to build. In addition, it is slightly larger than its predecessor and yet a little more stable. Only the price could be a little lower. For 756 parts, COBI takes a lot and approaches the Danish level.