There are plenty of variants of the Sherman, so that COBI shouldn’t run out of models anytime soon. This is about the more heavily armored “Jumbo”. 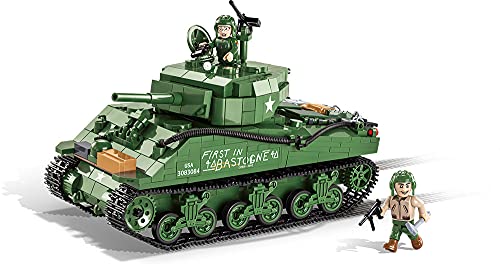 The instructions for the Jumbo include 3 construction phases with a total of 125 construction steps. On the last pages there is again the now mandatory parts list and a printed tabletop card. Only new components are shown in color, while the rest are completely grayed out. Unfortunately, a small mistake crept in. Suddenly a 1×1 plate appears that was not previously displayed. Basically no problem for experienced builders. However, this part is not in the parts list and is missing from this set.

In a completely unspectacular way, we start with plates that form the bottom of the hull. This is followed by large bricks that give us stability. We build the running and drive rollers at the front and rear separately and then place them on the hull by reversing the direction of construction. The engine is not overly complex, but is still completely built. COBI is now happy to do without the old molded parts, which increases building fun.

The front half of the tank is built directly on the model and the typical shape of the Sherman quickly emerges. The entire stern is built separately and attached via 2 hinges. In this way the bevel is achieved that is required for the shape of the Sherman. Details are also used here that give the whole thing a little more color. After the engine compartment has been covered with 2 hatches, the rest is tiled.

After we have achieved a smooth surface through tiles, we put a few more tubes on the side, which give us a very nice look. Next we take care of the rollers and chains. 12 wheels need to be rubberized before we can attach them. While we built the connections between the rollers on the Easy Eight, the old molded parts are used again. The tracks run great, which is not often the case with the Sherman models from COBI. Next, let’s get to the turret.

This is built as is usually the case with COBI. We create a base with a reversal of the construction direction and then attach the side armor and the gun. Finally, the turret receives an antenna and a machine gun. We are adding a very special part to the rear of the tank. A chain with 2 tracks. This is a slightly fiddly job and the individual tracks must be precisely aligned so that the racks do not tilt and hang straight down. Since the new figures are used here, we still have to put the feet on them, which are now always separate.

COBI has again created a very nice and detailed model of the Sherman. The level of detail is not quite as high as in the Easy Eight, but still well above that of the standard model. Unfortunately, I had 2 missing parts, one part being missing due to an error in the instructions and thus also the parts list.