COBI focuses primarily on World War II and increasingly on more modern military vehicles. With this set there is once again a model from the First World War. 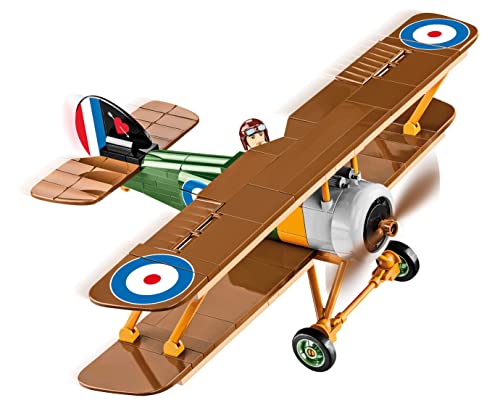 The hull of this model is very short, so the cockpit can be built quickly. The rear is also quickly put together. Nevertheless, no savings are made in reversing the direction of construction. Finally, the printed slopes must be attached sideways. The engine is made up of multiple moldings, with the cover being rather frustrating. It is better to only install this part at the end, as it would constantly fall off anyway. There is hardly any clamping force.

In the next steps, the two wings will be built. As with the Red Baron, the upper wing is attached to rods. Below is the machine gun. If the rods are fully inserted, the wings will flex severely. Some adjustment work is required here. It is best to insert them very lightly and then press the upper wing down until both are parallel. Only the landing gear, the propeller and the minifigure are missing and the little plane is ready.

The Sopwith Camel is more of a small snack for in between. The 176 parts are installed very quickly and you get a visually beautiful model. The stability is rather mixed. Overall, the model is stable, but you shouldn’t press too hard on the wings. The tiles and plates come apart quickly. Worst of all is the engine cover. This hardly holds at all with my model and keeps falling off.