The most successful boat of the Second World War was immortalized in a COBI model. At just under 64 cm, it takes up a little more space on the shelf. 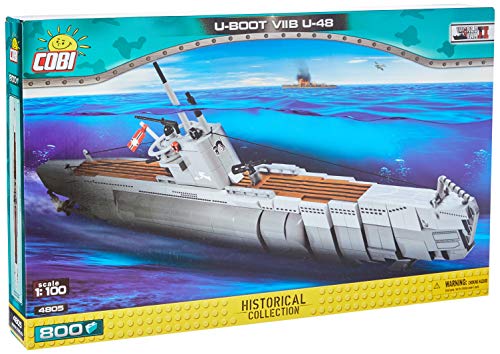 The submarine of the VII B class was the most successful boat of the Germans in World War II. The first enemy voyage took place right at the beginning of the war. 3 ships were sunk. In the course of the war it undertook 11 further enemy voyages and sunk a total of 52 ships and damaged other ships. Shortly before the surrender, it was sunk by its crew.

The quality can be described as excellent. No missing parts, clean processing and at least some printed parts. Unfortunately, there are also numerous stickers that go over several stones. I only attached a few essential stickers to my model.

The instructions include 4 construction phases with a total of 152 construction steps. The descriptions are detailed and there are rarely many components set at once. However, this cannot be completely avoided with a model of this type, since large areas are often built on with the same pimples. Only the new components are shown in color and the rest are grayed out.

In the first step, a stable hull is built from plates, which can also be used as a baseball bat. The front and rear are built separately and attached to the fuselage.

The complete fuselage and side panels are also built separately and connected to the fuselage by reversing the direction of construction over the full length.

Now the first filigree work begins. All gaps are closed by small construction steps. We attach the screws and the rudder to the stern. The turret and the guns are now also attached.

Following the viewing platform, threads are knotted and the base is built.

The 800 parts of the submarine are divided into recurring construction steps. Part of the cladding is built and attached. For a comparatively low price there is a few hours of construction fun.