The First World War was also fought with tanks, although not nearly as much as the Second World War. With the A7V assault tank car, COBI poured the beginning of the German armored weapon into bricks. 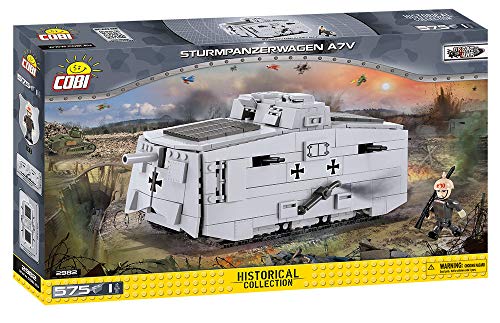 Abteilung 7 Verkehrswesen does not sound like an armored weapon, but from this name came the abbreviation A7V. The assault tank was developed late and should be the answer to the English Mark 1. With just 20 vehicles built, the importance in the war was rather low. In addition, the tanks would also like to tip over if they were not left lying for other reasons. The only model still in existence today with the name “Mephisto” is in the Australian Queensland Museum after it was recovered after a battle by Australian units from a grenade funnel into which it was previously tipped.

At this point, as with almost all COBI models, there is nothing new to report. All stones fit perfectly and have an exceptional clamping force. All labeled parts are printed.

As with every tank, we also start with the hull here. However, this differs significantly from other models. Right from the start, there is a massive reversal of direction of construction and construction from all sides. Various, alternating layers of plates and bricks form a large, solid tub.

Before the first fairing is installed, the drive wheels and chains are pulled on. Instead of wheels, plate modified are used, which are usually used as mirrors on vehicles. In the next step, the side armor will be built, which consist of large panels.

These are attached by hanging on the top. An angled plate modified fits perfectly between 2 studs on the underside and gives the whole sufficient stability. The front and rear armor is connected at right angles to parts of the upper armor and then slipped onto the chassis. It really has to be pushed here so that both parts are anchored to the underside.

Finally, the structure is created, which includes the inspection hatches and the entrance. There is no turret on this tank. The gun barrel comes from an opening in the front armor. Of course there is also a suitable soldier with a pimple hood. The bayonet can be pushed onto the rifle, although not with the correct orientation.

The A7V has an interesting design that is completely different from all other tank models. Of course, this is also due to the idiosyncratic form of the original. A great model that got a permanent place between the other armored vehicles of the First World War and of course the red baron.