This ship is currently the longest battleship in the COBI range. In the end we have the choice of whether we want to put the IOWA or the MISSOURI on the shelf. Of course I built both. 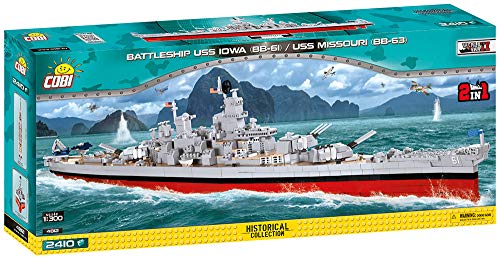 Of course, we need 2 instructions for a stately 2410 parts. With other sets, COBI even included 3 booklets for the same amount. A total of 438 construction steps are to be built, which are divided into 12 construction phases. The last step only involves converting the Missouri to become Iowa, and only a few components need to be replaced.

Anyone who has ever built a COBI ship knows the beginning. We start with the front part of the model and the bow. For this purpose, the construction direction is reversed, as the entire cladding of the ship is built in small stages and attached to the basic structure.

The bow is built in one piece and is then attached to the front part of the ship. Then we continue with the stern.

The procedure here is similar to that for the front part. After the deck has also been tiled here, it is the turn of the middle section. Plenty of large bricks are used there to give the model its stability. At the end of the first instruction we have an almost finished hull that could also be used as a baseball bat.

The ship walls of the middle part are built in one piece and then attached to the hull as well as the smaller parts at the bow and stern. Then we can continue with the superstructures.

This consists of numerous small construction steps and many small parts. After the bridge and small guns have been completed, it is the turn of the large triple guns.

At the end only small details like the anchor chains and planes are built. Finally, we will of course also build a stand on which the Missouri can be placed. By exchanging the black parts of the bridge for gray ones and the numbers and the name on the stern and bow, we turn the Missouri into Iowa. I like the black parts better, so I took the model back to the Missouri. A direct comparison with other large ships shows that the Missouri is the longest, but rather slim in the front area. The Yamato is a few centimeters shorter, but it is much thicker.

An Iowa class ship belongs in every collection, of course. After all, these battleships are among the most important in World War II and were also used afterwards. The 2410 components have once again ensured a long construction fun.