The Cold War has so many military vehicles to offer that can be implemented as models. This also includes this variation of the MiG-17, which was used in the former GDR. 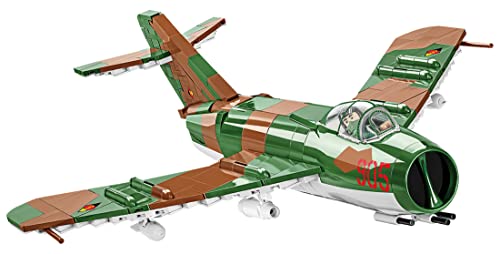 The first construction steps consist of building the complete wing construction. This consists of a layer of plates that are covered with tiles. On the underside, COBI’s special thin tiles with studs ensure sufficient stability. The entire fuselage is built in one piece, with the front made up of several large mouldings. The construction of the rear wing is the same as on the MiG-15 and that also makes it just as unstable.

After the wing and tail are combined, the fuselage and cockpit are closed. In the last construction steps, the armament and the landing gear are built. The base is larger than the usual stands and identical to that of the MiG-15.

The Lim-5 aka MiG-17 is a very special aircraft that probably doesn’t have a very large target group. It is solidly built and due to numerous molded parts it is already quite close to model construction. The price is comparatively high.