This super-heavy battle tank, which can certainly measure up to the Maus, was eagerly awaited by many. It is now available and construction can begin. 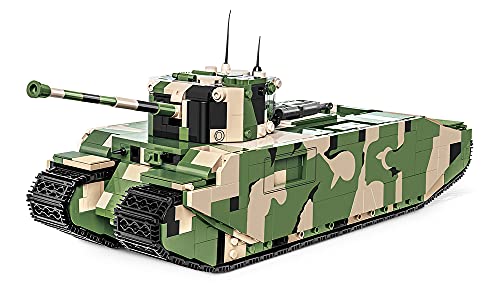 For the 1225 components of the TOG 2 there are extra thick instructions that contain 245 construction steps. These in turn are divided into 4 construction phases. The individual steps are easy to understand and the structure is not rocket science. The grayed out construction steps make it easier to place the new components.

Building the hull doesn’t start with large plates, as you might expect from a large model like the TOG 2. Instead, numerous 2×7 plates are used, which are reinforced from above with large bricks. After the second layer, brackets and plates modified to reverse the direction of construction are installed. These are necessary because the entire armor is built in separate construction steps and then attached to the side.

Only now are the enclosed large plates used. The lower hull is covered with these. Then we build a sweeping front and the rear. The machine and grenades provide the first details. At the moment the tank is still very narrow. That changes after 2 large side panels have been built. These are anchored on the sides with numerous studs and sit bombproof.

Next up is the side armor. This consists of two larger constructions in which the camouflage pattern is achieved by colored tiles. After they have been installed, large printed tiles are placed on top. The next construction steps ensure outstanding running and drive rollers. We put the 4 individual attachments at the front and rear.

The mighty chains, each consisting of 54 tracks, have to be pulled completely through the hull. This only works if you follow the instructions and hold the TOG 2 upright. Then they slide through easily and can be connected. Finally, the last gaps in the hull are closed with tiles and we start with the turret. Compared to the entire tank, this is quite small.

The construction is very similar to the other models from COBI. First, a base with plates and bricks is built, on which the armor is then attached all around by reversing the direction of construction. The barrel, and therefore the caliber, is quite sparse considering the size of the tank. As soon as the turret has found its place on the hull, the model is ready.

To be honest, I had imagined the model to be a little bigger. The length can keep up with the Maus. However, the TOG 2 is significantly narrower. Nevertheless, it is a very nice model with great construction techniques and a successful look.