In this half-track vehicle, COBI applied some new construction techniques that were not previously available. However, details that were very popular with similar models have also been omitted. 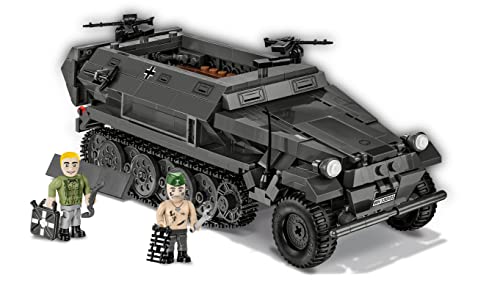 Even if we only have 99 construction steps in total, the construction was divided into 2 construction phases. This makes it very easy for beginners to build the model. The style that COBI has cultivated for a long time also contributes to this. Only the new components are shown in color. There are also no hidden areas, as you can find them again and again with other manufacturers.

The beginning hardly differs from tank models. A base is created with plates on which the mounts for the rollers are then placed. But since we’re not building a tank here, the front looks different, of course. This is more like a truck and therefore also has a hood. This is shaped by hinges and attached to the front axle.

After the fenders were also built at the front – no molded parts are used here – it is the turn of the loading area, in which the soldiers will later find their place. There are 2 rows of benches for this. We build the side armor separately and then place it on the loading area. The rear doors look very similar to those of the older models. However, a completely new mechanism was used. Instead of closing the doors, they tend to be pushed open. This is achieved through the use of android arms. Unfortunately, that also makes the construction a bit shaky. In the next step we turn the model over and put the tires and castors on. Unfortunately, there was no steering, as we find it in the US half-tracks.

The tracks are always a bit of a problem in such vehicles. However, the chains run relatively well if you apply a little pressure from above. Finally we build 2 machine guns and the two minifigures. Here again the new figures are used, which are slightly larger because you have to attach the feet separately.

I find it a little unfortunate that this model has no steering. After all, the US half-tracks showed that it was possible. Apart from the color and the rear doors, it only differs in details from other models such as the stub.