French tanks are rather a rarity. With the R35, COBI has launched a small but beautifully designed model. 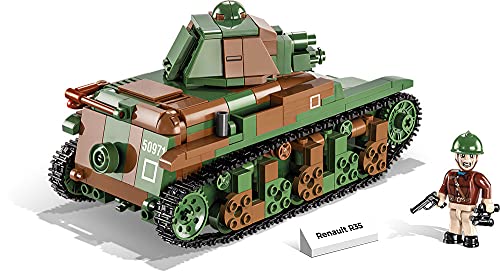 A total of 540 components are divided into 62 construction steps and 2 construction phases in these instructions. In some places the builder is given the choice of building the French or Polish version. There are different printed parts for this.

Since we have a width of 7 studs, a large plate cannot be used for the base of the hull. Instead, smaller plates in various sizes are used. We then put a mixture of bricks and plates on this, as well as various bricks to reverse the construction direction. The first small details are also used. After attaching the rollers, the entire underside is stabilized with the special, flat tiles from COBI.

In the next construction steps, the hull will be further built up and the castors hidden behind a slightly fragile construction. Different slopes give the R35 its shape. Even if the engine compartment has little space, a small engine is built from bricks. We build the stern separately again and then attach it to the hull.

The chains run amazingly well when you consider that this is the smallest variant. With most of the other models, it either does not work at all or only runs on a carpet. Although the turret is small, it consists of quite a few parts. Many small parts are used here.

In the pictures, the model looked rather ugly. However, the reality is completely different. Due to the many small parts, the R35 has got a very nice shape and looks really good.